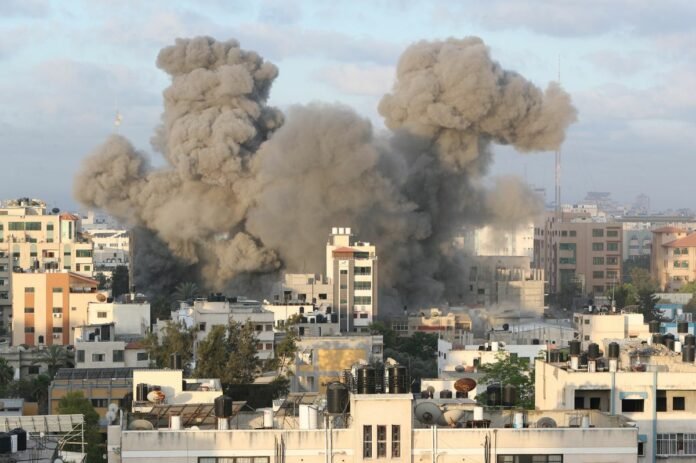 Tel-Aviv: Cross-border fighting between Israel and Hamas appears to have slowed slightly early Tuesday, with no deaths recorded for the first time in Gaza since hostilities erupted on May 10 and fewer long-range Palestinian rocket attacks.

But a call by U.S. President Joe Biden on Monday in support of a ceasefire appears to be disobedient. Israel has said it will continue its offensive for the time being to destroy the capabilities of the armed factions Hamas and Islamic Jihad, and rocket attacks continue.

The United States and other world powers have called for an end to the fiercest escalation in the conflict in years, in which Gaza officials say 212 Palestinians, including 61 children and 36 women, have been killed.

There was no immediate word from Israeli victims Tuesday. Ten people have been killed in Israel, including two children, in previous Palestinian rocket attacks.

In the signs of a possible spread of violence, the Israeli army said its troops had shot dead a Palestinian who wanted to attack them with a rifle and improvised explosive device in the occupied West Bank and that it was an uncrewed aerial vehicle (UAV) near the border on Tuesday with Jordan.

General strikes were held on Tuesday in East Jerusalem, Arab towns in Israel and in the Israeli West Bank, with posts on social media with a Palestinian flag and calls for solidarity “from the sea to the river”.

Palestinian businesses across East Jerusalem have been shut down, including in the walled Old City. In the mixed Jewish-Arab port city of Haifa in northern Israel, protest organizer Raja Zaatar told Reuters the strike had 90% of the businesses in Arab neighbourhoods closed.

Ra’afat al-Saman, a business owner in Salahaddin Street in East Jerusalem, named after the Muslim conqueror who seized Jerusalem from the Crusaders in 1187, said he supported the strike.

The road is just a few minutes walk from the Al-Aqsa Mosque, the third holiest site in Islam, in the heart of the walled Old City on the historic compound known to Jews as Temple Mount and to Muslims as the Noble Sanctuary.

Hamas launched its rocket attack last Monday after weeks of tension over a court case to evict several Palestinian families in East Jerusalem. In retaliation for Israeli police clashes with Palestinians near the city’s Al-Aqsa Mosque, Islam’s third holiest site, during the Muslim holy month of Ramadan.

Yuval Steinitz, an Israeli cabinet minister from Netanyahu’s right-wing Likud party, lamented the strike as a further blow to the delicate fabric of Jewish-Arab relations and cooperation in a radio interview.

The fighting in Gaza, caused by Palestinian anger over Israeli action in Jerusalem, has often caused violent Jewish-Arab unrest in Israel.